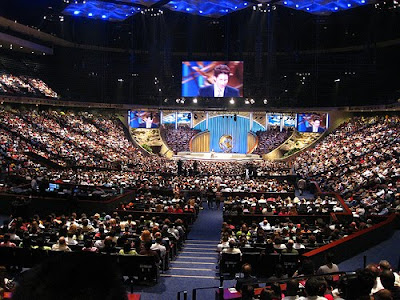 There were a few things that stood out to me.

But first, it doesn’t surprise me that Lakewood Church is at the top of the list for a few reasons. They have the “biggest” physical church in North America (that I’m aware of). If you remember the story, they purchased the previous Houston Rockets stadium. And the kinds of messages he preaches are quite popular. And they’re the second oldest church in the group.

What is of particular note, though, is the church that is second on the list: LifeChurch.tv. They are the youngest church in the group, being founded in 1996. So what made LifeChurch.tv different than all the others? They were the original pioneers of the multi-site movement. From the very beginning, they decided to stick with smaller venues of about 600, but to multiply as quickly as possible from there. So they present from the “home studio” church and broadcast to all the other partner churches. This decentralized approach of planting quickly has worked exceptionally well for them.

Since it became popular, all the major churches have moved to have multi-site campuses. Right now it’s quite common for churches to have 2-3 campuses.

I know that they also adhere to a very simple structure. They hold services for children’s, youth, main church, and they do small groups. That’s it. This allows them to be light on their feet.

I think this is a good challenge for most of us to think about the kind of systems we have in place in our churches? Do we have a system in place by which new people can be encouraged to come back, get involved, take next steps, and grow spiritually?

I wonder what other lessons we can extrapolate from that data?

What do you think?