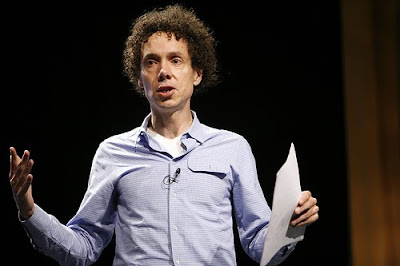 “Do you get better at making decisions if you have more information? No.”
This was the first question posed by Malcolm Gladwell, in his talk at the Catalyst Conference. Malcolm Gladwell, of course, is the author of such books as Tipping Point, Blink, and Outliers.

It’s such a fascinating question because it seems so logical. The more information you have, the more perspective you can attain, and seemingly make a better decision. That is why, for example, many applaud President Obama for taking these months to sketch out a new strategy for the Afghanistan war. He’s been taking his time. Seeking information. Trying to understand. And many think that that’s the best way to do it.

In his studies on this question, though, researchers have found that sometimes the opposite happens. The more information you have, the more it simply reinforces something that you may have already believed.
“Incompetence irritates me…but overconfidence scares me.”

This, he said, was one of the biggest mistakes that leaders make: overconfidence.

When we have a lot of information, sometimes we become so overconfident that we end up making mistakes in the process. I don’t think we have to look too far into the past, either, to see this principle in play. Some have pointed to the beginning of the Iraq war as an example of this. We were so confident that we only sent in a certain number of troops to begin with.

Gladwell cited this example below:

“In 1863 during the Civil War in Virginia, the Union army was in incredibly poor shape, and President Lincoln was becoming increasingly worried. Fighting Joe Hooker came and happened to know more about Confederate General Lee than anyone. Hooker devised a brilliant plan to distribute his army in thirds and surround the Confederates. Lee was outnumbered 2 to 1. Hooker said that even God almighty couldn’t prevent them from victory. What happened next was the battle of Chancellorsville. Hooker expected Lee to retreat, became entrenched in his confidence, and did not plan for anything else. The Union army lowered their guard; Lee attacked, and Hooker’s army retreated– suffering one of the worst defeats of the war.” -Story summary from here.

So what are the signs of an overconfident leader? Gladwell says, “they stop listening to those around them.” When your voice becomes the best voice, there might be a problem. This reminds me of what Andy Stanley often says, “Your not the smartest person in the room, you’re only the leader.”

Gladwell says, “What we need is humility in times of crisis not bold action.”
I would add that from a Christian perspective, having that humility is what keeps you listening to others, helps you to avoid making rash decisions, and depending upon God. Such a vital ingredient.
What about you? What other mistakes would you add? What other lessons did you pull from this talk?
New to this series? Click here.
[image by Pop! Tech]