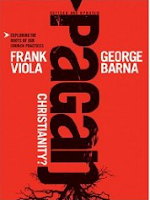 Pagan Christianity is a book that seeks to examine the “source of our churches traditions and then ask how these practices square with Scripture and the practices of the first-century church” (ix). It’s been one of the most hotly debated books that I’ve heard of recently, creating quite a stir. Most people either love it or hate it.

Here are some problems that I have with the book, though:
1. His mixed use of phrases: In the introduction to the book (p. xxxi) he gives some definitions of terms that he uses frequently. The problem comes in his definition of the use “unbiblical.” The Random House Dictionary defines unbiblical as “not in accord with, or sanctioned by biblical teaching.” In other words, something that is unbiblical is something that is against biblical principles. But Viola uses the term to refer to something that is not found in the Bible. Here he confuses the term extra-biblical with unbiblical. Something that is extra-biblical is something that is not found in the Bible. It is an emotionally neutral word.
The Bible doesn’t mention chimneys or a million other things. Those things are extra-biblical. It doesn’t mean they are evil, they just are not mentioned in the Bible. Yet, Viola uses the term unbiblical to refer to things that are not mentioned in the Bible. Unbiblical, of course, is an emotionally charged and loaded word. So when he uses the word unbiblical, it gives the impression that what he’s referring to is violating biblical principles. This is irresponsible. Crusades were taken because people violated biblical principles. Yet he uses this word with full force nonetheless.
2. His dismissal of Old Testament principles: With one quote Viola dismisses himself of any attachment whatsoever to anything that’s written in the Old Testament. He says, “Ancient Judaism was centered on three elements: the Temple, the priesthood, and the sacrifice. When Jesus came, He ended all three, fulfilling them in Himself…Consequently, the Temple, the professional priesthood, and the sacrifice of Judaism all passed away with the coming of Jesus Christ” (11).

He uses this argument to attempt to erase any semblance of order in a worship service, leadership, or place of worship. So with the one quote, he completely divorces himself from the Old Testament and any principles that may be applied, and moves on to his ideal worship service. He uses this same argument to disavow any use of pastors in the NT.

3. His questionable application of historical facts: Though the book is filled with lengthy footnotes, it does not do them academic justice. You see, it’s one thing to have an observable fact. The other thing is how you apply it. It’s one thing to have data, but another thing how you extrapolate the data. He takes what happened in the New Testament as a prescriptive ideal of what has to happen in order for a church to be biblical. By doing this I think he misses the point that what happened in the New Testament worked as it should because they were being led by the Holy Spirit in the midst of persecution.
4. His dogmatism related to paganism itself: Viola wants to draw the line with anything that could possibly have had any pagan influence. I think one of the more important questions involved is, “can a pagan symbol be redeemed for Christian use?” I think the answer to that is yes. For example, in Numbers 21:6 God sent serpents amongst the people as a punishment for their rebellion. To quell the serpents that were biting people, the people were commanded to look upon a bronze serpent that Moses had shaped on a pole. Ever since Eden, serpents had been considered a symbol of sin, a symbol of rebellion against God. Through this action, God redeemed this “pagan” symbol and used it as a symbol for salvation. In Acts 17, Paul used the symbol of a pagan altar addressed “to the unknown god” (Acts 17:23), and used it as a bridge to take them from what they know, to where God is. He used a vehicle that was very familiar to them, and “reframed” it for the sake of Christ.
Regarding preaching he attempts to find its pagan roots through traveling-preaching pagan philosophers (89).  But did not Jesus preach and teach? Did not the disciples gather to preach? Did not Paul preach and teach constantly? He says, “research conducted by the Barna Group has shown that sermons are generally ineffective at facilitating worship, at drawing people closer to God, and at conveying life-changing information to those in the audience” (104).

This quote, however, is in direct conflict with research done by Thom Rainer, author of Surprising Insights From the Unchurched, which shows  that quality biblical preaching is one of the biggest factors in attracting the unchurched. Rainer says, “…we noted the high correlation between expository preaching and evangelistic effectiveness. Now we are hearing from the formerly unchurched that preaching that truly teaches the Bible in its original context is a major factor in reaching the unchurched…the formerly unchurched told us that they were attracted to strong biblical teaching and to understanding Christian doctrine” (58).

In referencing the use of the word “pastor” in Ephesians 4:11, Viola says, “This is the only verse in the entire New Testament where the word pastor is used. One solitary verse is a mighty scanty piece of evidence on which to hang the Protestant faith” (106). What Viola misunderstands, though, is that the modern role of pastor is akin to what is called an elder in the Bible. The apostle Paul would plant churches and set in place elders to lead the church. This was in line with the role that God had called him to as an apostle (church planter). But instead of noticing this, Viola tries to make the awkward connection that since Paul would start a church and leave, that churches that have pastors are functioning in an unbiblical form.
Although I agree with many of the findings Viola makes regarding pagan origins, I don’t agree with his conclusions that the only acceptable and God honoring form of meeting is in a home with out any kind of leader. As Christians, our job is to be missionaries to whatever culture has yet to be impacted, and to seek whatever methods we can to reach them that does not violate biblical principles.

The reason that Christianity is a little different in every country and culture is because people have taken this missionary principle seriously. What we bring to culture is not a form of worship, or a building, or a model of leadership, we bring them Christ. And our job is to speak to them in the language that they understand, all for the purpose of them understanding and accepting Christ.

Do you agree? Disagree? Why?